Whatever After: Sink or Swim

Whatever After: Sink or Swim 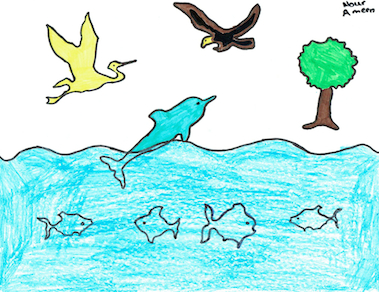 Did you ever wish that you were someone that you're not? Well then I have the perfect book for you! It's called "Whatever After: Sink or Swim". It's written by Sara Mylnowiski. This book is mysterious and fiction. The setting is a castle in a fairy tale. If you like books that are similar to fairy tales, I suggest you read it.

The main characters are Abby, Jonah, and Little Mermaid. Abby and Jonah are kids that have a magic mirror. Whenever they knock three times, the mirror takes them into a fairy tail. I can relate to this book because I would love to have a part in a fairy tale. The writing is great because I felt like I was with the characters as they tried to convince the mermaid to keep her tale. There was suspense when they were trying to keep from being eaten by sharks. And there were funny parts as they helped her plan her royal wedding.

I recommend this book to people who like fairy tales. I would tell you my favorite part, but I don't want to ruin the ending. As I said, it's a great book for its humor and suspense.

Nour A.
is a student in
Mrs. Reeves' 4th Grade Class