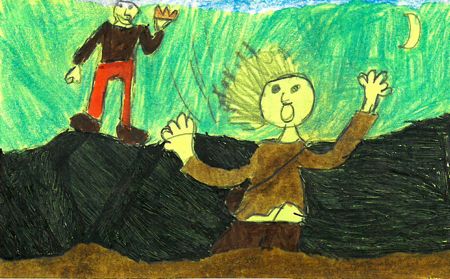 This story takes place in England. It is about a boy named Crispin but he doesn’t know it yet. So everyone just calls him Asta’s son. His mother just died and the only person who really cares is Father Quinel. For some reason, Crispin was named a wolf’s head and that means that anyone can kill him. Father Quinel says he has to flee, so he does. On the way, he meets a man named Bear because he is so large. When Crispin tried to ask him for directions Bear threatened to beat him if he didn’t become his servant by oath. Bear taught him to juggle and play the recorder. After a while of being with Bear, Crispin feels somewhat safe with Bear and that day, Bear announced that they were going to Great Wexly, a town. They went through a smaller town and settled there for the night. And when they got to Great Wexly – well you’ll just have to read to find out what happens!

My favorite part of this story is when Crispin finally learns to juggle, even though he says he won’t be able to. The moral of this story is that when things are at their worst, you find a way to cope through them, and everything will turn out fine. Something that is unique about this story is that this 13-year-old boy can survive on his own, especially during this time in history. Something else that I’ve noticed is that you can kind of tell what is coming next.

The kind of people that would enjoy this book would like things like adventure and coming out of troubling times into relief.