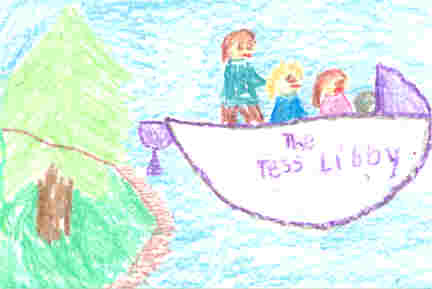 In the story, Touch Blue, a young girl named Tess Brooks lives on a tiny island off the coast of Maine where her father is a lobster fisherman and her mother is the island school’s only teacher. The state of Maine has decided that too many children have left the island and they may be forced to shut the school down until the people on the island come up with a plan to bring in foster kids to fill the school. The Brooks family gets a foster boy named Aaron, who doesn’t like being there...at first!

My favorite part of the story was that at the end Tess was allowed to finally drive her dad’s boat. She had been wanting to drive it for a very long time. I also liked that Aaron got used to the Brooks family and really had fun with them. He even helped Tess with her skiff and agreed to be the church organist which means he’s planning to stay with the family. Also, the mean things Eben said about Aaron being an orphan made me very sad.

I would definitely recommend this book to other people. Even my mom loved it. I think this book would be best for any kid in grade 3 or higher. It’s happy and sad at the same time.