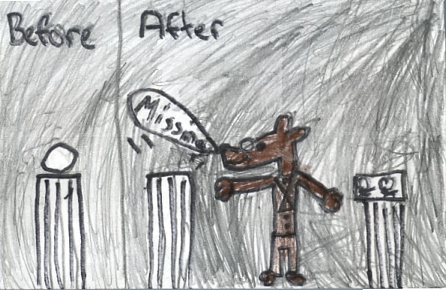 This book is very funny and creative because they have cars which are called Autosaurus. An Autosaurus has a seat on the front for the driver to control the Autosaurus. It is called the bridle. On the back there is a seat for extra passengers. Also on the back there is a tank where they put stuff in it. There is a little dinosaur in the front called the Shrieker who makes a loud sound like a horn on a car. This story reminds me of NYC because there are subways, busy streets and tall buildings. My favorite character is Hercule because he is funny as he always ignores what Geronimo says and takes credit for the good plans that Geronimo comes up with.

I recommend this book to people who like funny, kid-friendly books. It’s not too long nor too short. I think Geronimo Stilton relates to me and maybe you because he acts like a scaredy mouse. I also can be scared like him when I go on dangerous adventures. I like the pictures in this book because there are captions that show what the character is saying. They

A.Y.
is a student in
Mr. Grin's 3rd Grade Class