The Bears on Hemlock Mountain

The Bears on Hemlock Mountain 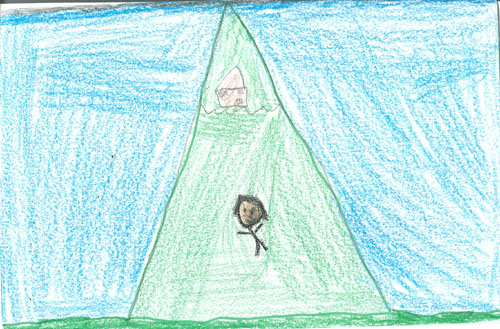 In this story I met a kid named Jonathan. Jonathan’s mom told him to get a big pot from his aunt’s house. His aunt lives on top of the mountain. Jonathan goes to his aunt’s house and falls asleep. He needs to get home before dark. He needs to because he is scared of bears and thinks that there are bears on the mountain. He thinks they will attack him. Then he wakes up, looks out the window and sees that it is dark. He hurries back home, but then hears a noise. It is two bears. The bears try to attack Jonathan and he hides under the pot. The bears stay around him. Will Jonathan ever find a way out?

I would recommend The Bears On Hemlock Mountain to a person who likes to be on the edge of their seat while reading a book. In the story you are kept on the edge of your seat when Jonathan almost gets attacked by bears and you keep wondering if Jonathan will be safe or get hurt. You will love this book!