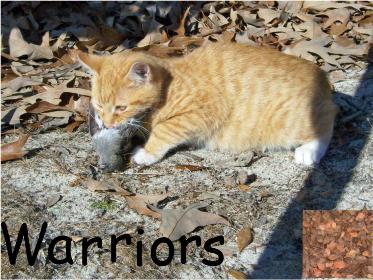 Warriors: Into the Wild is about a house cat named Rusty that dreams of venturing into the wild and meeting the wildcats that live there. One day, he journeys beyond his household into the forest for a look around. While hunting down a mouse, he is attacked by a wildcat! Later, the wildcat's companions show up and introduce themselves as Graypaw, Lionheart, and their leader Bluestar. They seem friendly enough, until Rusty asks about the possibility of sharing prey. Bluestar seems very riled up. She tells him of the strife and hardship her Clan goes through. And then, she does something no warrior would expect. She asks him to join her Clan of wild cats. Does Rusty except? Join Rusty, and his adventures in the wild.

I LOVED this book, because it was one so descriptive, it pulled you into any place of serenity, any battle that might take place. My favorite character was Graypaw, because of his playful attitude. This book is part of an enormous series done by the Erin Hunters. Even though the characters and setting are the same. Even though the books will "flash back" to previous books, no two books are the same.

I recommand these books to fantasy lovers out there!

Aidan M.
is a student in
Knights of the Literary Round Table