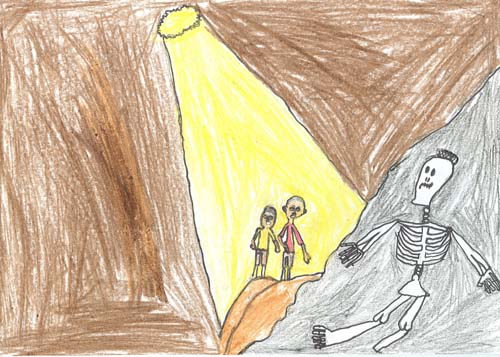 In this great mystery, two brothers and a cousin, Jeff, David and Claire, are trying to find where a bunch of gold is hidden. Jeff and David have two dogs named Rascal and Tessie and Claire has a dog named Yum-Yum. Tessie, Rascal and Yum-Yum help the kids a lot. Jeff, David and Claire have to get many clues to find where the gold is hidden and who hid it. They had to make lots of maps of where they think the gold is hidden which they think in on Lost Island. There is a man named Mr. Wellback, who people call Grumpy Gus. The boys and Claire think that Mr. Wellback is trying to stop them from finding the gold. Is Grumpy Gus a bad person trying to stop the kids? Will they ever find the gold? Who hid all the gold? Read this book to find out!

I like the characters Jeff, David and Claire. I like them because they don’t act silly, but they act ready for an adventure. They are also very serious and listen to what people have to say. I also like the pictures. I like them because you can tell what is happening. You can also easily tell what is in the pictures. What I don’t like is that someone is murdered in the story. I don’t like it because a good person is dilled. I also don’t like it because his body is hidden very well, so it is hard to find.