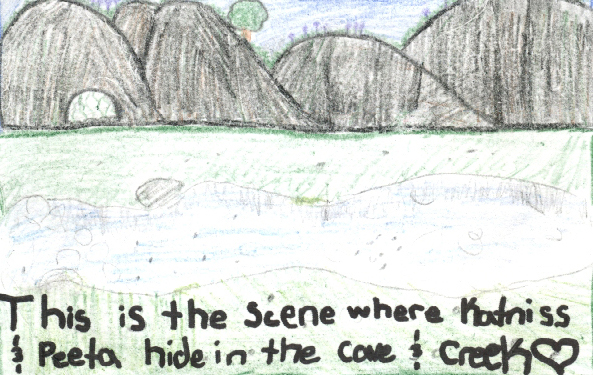 Katniss Everdeen is a young seventeen year-old girl who lives with her brave little sister Prim and her mother. Her mother blocks the world out and counts on Katniss for everything. Where they are living, the Capitol runs twelve districts. President Snow is in charge of the capitol and the twelve districts. He is unfair and treats people like slaves. To prove he is in control and for his entertainment, he sets up The Hunger Games every year. One boy and one girl from each district have to go in the arena for The Hunger Games and fight until the death. There are twenty-four people and only one can come out alive.

Katniss would do anything she can to win for her little sister and her best friend Gale, until Peeta comes along and then everything is different. Now she would do anything to keep Peeta alive, even kill herself.

The Hunger Games keeps you pondering every move and questioning every decision. Things happen that make you feel like you are there and that you can’t stop reading the thrilling story of Katniss’s desire to keep Peeta alive and Peeta’s passionate, undying love for Katniss.

I like Katniss Everdeen, the girl on fire, because she is the bravest person I have ever read about or met. She always puts others before herself and keeps her emotions under control so she won’t hurt others. Katniss is very clever. She finds clues and figures them out in time to save herself and Peeta’s life. Katniss’s personality is very serious and plain. Reading her figure out all the clues so they can survive, and learning what she is thinking is just astonishing.

I also like the character Peeta. He is in love with Katniss and has always been sense they were little kids. He would give anything for her, which is so sweet. Peeta is very good with his words. He knows the right things to say and when to say them and can persuade anyone to do anything. Peeta is very strong but he is not as clever as Katniss.

I have two favorite parts. On the day of the reaping when everyone in district 12 came together, Effie picked a boy and a girl for the Hunger Games. When Effie picked Katniss’s little sister Prim, Katniss volunteered to take her place.

My other favorite part was when the gamemakers said there could be two winners if they are from the same districts. Katniss ran to find Peeta to team up with him. She went searching through the woods and almost stepped on him because he camouflaged himself. He was hurt very badly so she brought him to a cave and helped him gain his strength.

When I read about Peeta making a plan to become allies with a group and try to kill Katniss, I did not respect him. However, I sort of knew it had to be a trick to save her and gladly it was.

I recommend The Hunger Games to people who love action packed, dramatic stories. Out of all the books I have read, the Hunger Games trilogy is my second favorite. My favorite is the Twilight Saga, which readers would probably like, too.

MacKenzie B.
is a student in
Mrs. Daoust's 6th Grade Class