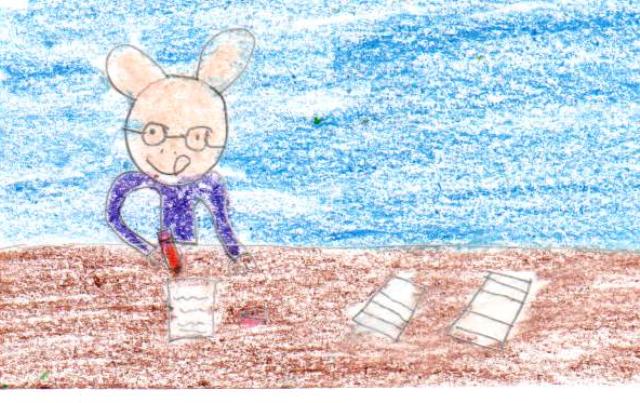 Arthur had to write a story about what was important to him. Arthur wanted to write a story about how he got his puppy Pal, but when he read it to his sister D.W., she said she will rather write about getting an elephant. And that’s when Arthur added elephants to his story .Then the next day Arthur read his new story to his friend Buster and he asked him if that was a good story and Buster said it was all right. Then Buster told Arthur he should write about outer space and that’s when Arthur got the idea of writing about an elephant in outer space. Then the next day Arthur read it to brain .Then brain said that a story needs to be well researched. So that’s when Arthur went to the library to research his story. Then Arthur and his friends went to a restaurant called the Sugar Bowl and Prunella said last year somebody got an a+ for writing a song. So that’s when Arthur got an idea of writing a song and he sang it to his class. Finally Mr. Ratburn said to Arthur now read and the Arthur read his pet story instead and he got an a+. If you want to find out what lesson Arthur learns you have to read this book.

My favorite part in the book is when Mr. Ratburn said to Arthur next time leave out the dancing. A character I found interesting was Arthur because in the beginning he wrote a well written story and people kept on saying no it’s a bad story. If I were him. I would not listen to them. He reminds me of my of my brother because he always tells me what to write about and I tell a subject. If he hears other subjects or people’s ideas then he will change his story. It reminds me of when I was choosing a book and then my other friend said, "No you should get this one, no maybe this one , this one is good".

I will recommend this book to 2nd graders 3rd graders and 4th graders because it is an easy read. The words can be understood and the pictures help you do that. So if you want to know what lesson Arthur learned you have to read this book.

JG
is a student in
Mr. Fulton's Class