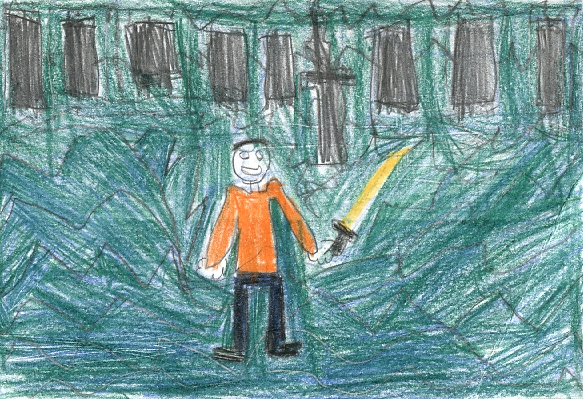 The Lighting Thief by Rick Riordan is about a boy named Percy and Grover. Percy has been to six different schools in six years. Wow! How is that possible you ask? Percy and Grover are abnormal in some ways. The characters are not all human. Percy is part god and Grover is part goat. The story follows the boys though monster attacks, a friendship with Annabeth, Athena’s daughter, and finally get a quest to Hades realm to retrieve Zeus’s master bolt.

Near the end of the book I did not like the character Luke because he was pretending to be Percy's friend and tried to kill him with a poisonous scorpion.

My favorite part was when Percy was fighting Aries, the god of war. Percy cut Aries and he bled gold and blood.

Rick Riordin made this interesting by making up his own story about three kids, but added Greek creatures and gods to the events in the story.

One reason I like this book is it has a lot of battles. An awesome battle is when Percy, Grover, and Annabeth fought Medusa. They cut off her head. Another reason I like this book is sometimes things explode, like a bus for instance. Plus, I just like reading about Greek mythology. That’s why I recommend you read the whole book and the whole series.