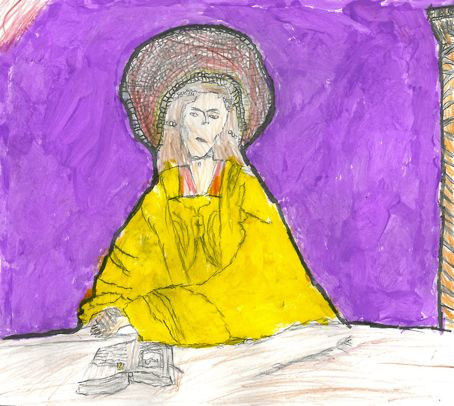 This book deserves a royal spot on the bookshelf!

Anna can’t be living any better; she is the firstborn of the emperor and is entitled to the throne. She has servants prancing all around her on their toes and satisfying her every need. Anna must learn to rule the empire from her grandmother a good but cruel politician, who was the reason Anna's father was on the throne at all. When Anna decides she will not be her grandmother’s puppet, her world is taken from her and bestowed with all its privileges on her little brother, John. Her grandmother did this because she thinks that John would be a more willing and obedient puppet.

This book is about a real person, and is based on historical events (in fact the real Anna, a Byzantine princess, wrote a book about her father Emperor Alexius, called The Alexiad). This is why this book is unique.

I liked this book because it is full of beautiful descriptions and unexpected yet thrilling moments, like the plot to poison John. I liked Constantine Ducas (Anna's first fiancé) the most, because he was a warrior and an advisor to the Emperor.

At the end of the book, John changed by not being the selfish puppet of his grandmother. He stood up to his grandmother by banning her from court when he became Emperor.

I would recommend this book for anybody who wants to read some fiction about Anna Comnena and her plots to regain her right to become Empress.

Yosh S.
is a student in
Ms. Jackson's Class