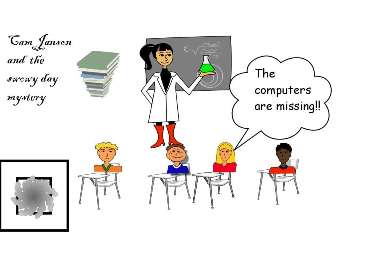 This story is about when these thieves stole three computers. Cam, Erick, and Danny are trying to find the missing stolen computers. Cam's name was Jennifer Janson but then people realized that Jennifer had a camera in her head, so they called Jennifer camera. Then it was shortened into Cam. Cam found that the theives took the computers before school started. Cam also figured out that there were two theives. One theif was in the computer lab carrying the three computers out. The second theif was standing outside in the snowy ground waiting for the first theif to give the three computers and one printer to the second theif. But the printer didn't fit through the window so they put the printer down on the floor. There were foot prints left on the snowy day and that gave Cam, Erick and Danny a very, very, very good clue about how to find the computers. It also helped them to find and arrest the theives. To find out if they find the computers or not you have to read this book.

You should read this book because this book is all about mysteries and solving mysteries. My favorite character is Cam (Jennifer). I liked the character Cam because she is the main character and she solves the mystery. This book is part of the series I like, the Cam Janson mystery books. This book is sort of the same as the Nancy Drew chapter series.

People who love mysteries and solving mysteries can read this book. This book is also for second, third and fourth graders.

Celine L.
is a student in
Mrs. Brosnan's Book Club