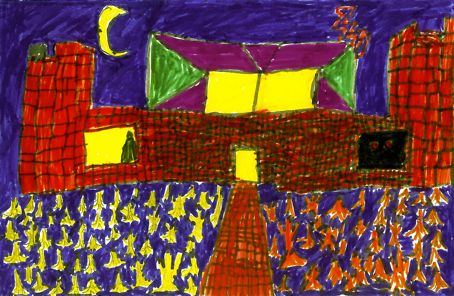 Have you ever thought you saw something that no one else did? If so, you and Jacob are a lot alike.

When Jacob was little, his Grandfather told him stories about Peculiar children, Monsters that the Peculiars hid from, and an Island that the Peculiars were safe from the Monsters on. When Jacob got older, he started to think that his Grandfather’s stories were just fairy tales, but when Jacob finds his Grandfather dying in the woods and a monster that looks like it came right out of one of the stories, he goes out looking for answers. Jacob travels to the Island that his Grandfather told him of, but it’s a little different than he expected. When Jacob gets to the Island, he goes through an ancient tomb and finds that he has traveled through time to the home that his grandfather described. Jacob befriends the kids there and helps them fight the Monsters. I would tell you more, but then you wouldn’t have to read it.

This is the kind of book that makes you feel as if you are right there next to the main character while you are reading it. I like those kinds of books, so I really enjoyed this one.

It was cool that the house itself is a character in the book - it has a personality, it feels like the house has spirits in it, and it looks like a castle. I also like all the kids' powers, such as flying, being invisible, throwing fire, and many more.

This book is filled with sinister photos that scared me. The author collected freaky, vintage, black and white, actual photos of peculiar children. One of the peculiar things about this book is how the pictures are used to make this fictional, creepy story seem real.

I recommend this book for seventh graders and up due to swearing and violence.

Warning: this book has a creepy factor to it that could disturb anyone.