The Boy Knight: A Tale of the Crusades

The Boy Knight: A Tale of the Crusades

Written by G. A. Henty 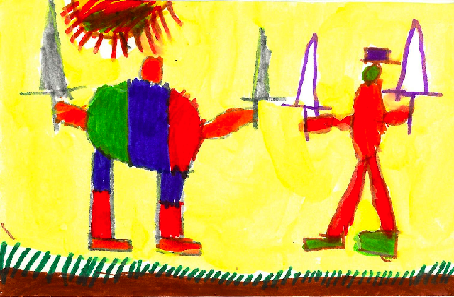 I thought The Boy Knight was not a good book. It was a series of tales that take place during medieval times. Many of the stories were about a young knight named Cuthbert, who goes to fight off the bands of outlaws who have been raiding monasteries and kidnapping daughters of the nobility. It dragged on and there were many stories that had the same idea. They were not even that well written, and all of the switching from story to story confused me. The author made all of the people sound like barbarians. He would have them talk in the third person about themselves.

This book was not unique at all. There were too many similar knight stories.

When I was reading this book, it made me think of the fear they must have of dying, and how well they can cover their fear.  Throughout the book, one of the main characters, Cuthbert, continued to grow stronger and stronger. I thought Cuthbert was brave and never did a wrong. He was truly a great knight.

I also did not like this book because it was too long. The writer should have shortened it. It was the same story over and over again. The reading level is for ages 11-13, but I would not recommend this book.