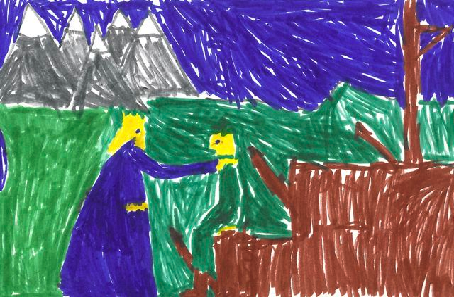 This book caught my attention off guard like the sun’s rays on a supposedly rainy day. It is about the second oldest son of Charlemagne, Carl, who is named heir, while the older brother, Pepin, is cast aside. Even though Pepin is the eldest son, Charlemagne doesn’t think that he would be fit for king because of his hunched back. In response, Pepin plots to kill Charlemagne and Carl in order to become king himself. Charlemagne’s life is shown through the eyes of his child, from the naming of the heir to the coronation of Charlemagne as Holy Roman Emperor.

I loved this book because it is connected to history and because there are always exciting things happening (like the death of Carl’s mother or a major battle). I would compare myself to Bertha, Carl’s sister, because we share a strong personality, short temper, lack of patience and a small disrespect for the rules. I liked how Bertha and her tutor, Anghilbert, secretly got married. Personally, I believe Carl was awesome because he was humble and warlike, but underneath, he was also kingly and courteous.

I recommend this book to people who love history (like me) and understand medieval grammar well (like me) or just don’t want to go to Wikipedia to learn more about the lives of Charlemagne’s kids. This book is written so well that it pretty much offers an amazing trip through time back to the life of Charlemagne, in color.