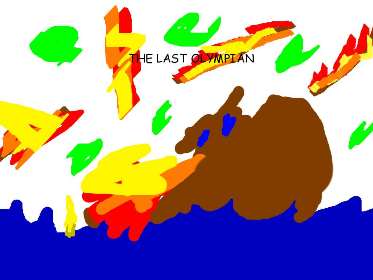 In this book, demigods and Gods fight to their final stand to defeat a Titan, Kronos. Percy's demigod friend, Beckendorf, comes with him. Beckendorf straps Greek fire to the controls of the ship while Percy distracts the monsters from going into the control room. The ship explodes and Beckendorf dies. The Titans are trying to over throw Olympus and the Olympian Gods. Percy bathed in the river Styx. Pretend you bathe in acid and multiply the pain 50 times and that's what it's like. Percy came out the river Styx and he was invincible. While the Gods fight their geatest enemy, Typhoon, the demigods fight Kronos. To help the Gods, Poseiden came out of no where and defeated Typhoon. At the same time, demigods defeated Kronos. Read this book if you want to know what happened to Kronos and Typhoon. I beg you to read this book!!!!

I have two favorite parts in this book. The first one is when Percy killed a baby demon holding a little demon's lunch box. My second favorite part in this book is when demigods and monsters were at war and demigods got cornered at the Empire State Building. I liked both of these parts because Percy and his friends were able to defeat the titans. My favorite character was Percy because he had a really cool sword. The sword was disguied as a pen. If I had one of those pens I would cut open doors in the school. Rick Riordan is a very good author because he makes Greek Mythology interesting and serious. I like learning about Greek Mythology and Rick Riordan makes that easy to do.

Nithin J.
is a student in
Mrs. Brosnan's Book Club