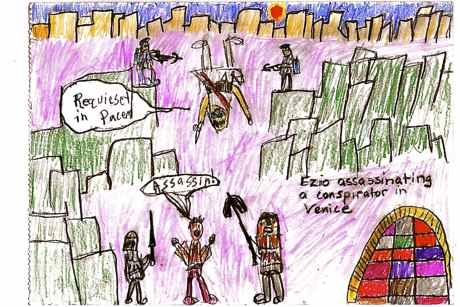 Ezio used to be a normal young man, but when his father and two brothers are executed, he goes out seeking revenge.

Before Ezio's father dies, he tells him to go into a hidden chamber in their house. When Ezio arrives there, he finds a white robe and a blade that could be concealed. The plot takes off from here. In his mission, Ezio must execute the conspirators that killed his family. Set in Italy during the Renaissance, there are many famous people in the book, such as, Leonardo DaVinci, Lorenzo Medici, Rodrigo Borgia, Caterina Sforza, and many Orsinis. Ezio has to go to Venice and many other cities to kill the conspirators. The final scene lives up to its promise and was everything I hoped it would be.

I like how Ezio, instead of losing hope when his family was killed, goes out for revenge on the people who killed his family. What I liked about the plot was that it kept me wanting to read more. The plot has unexpected twists and turns. For instance, one of Ezio's father's closest friends betrays Ezio for money. The author did a great job of making you believe that the man was really a friend, so when he sells out Ezio, you don't believe it until you read it twice.

Ezio is a good person inside, but on the outside he is a killer bent on revenge. The author did a very good job of describing Ezio. He is described as a lover, a fighter, and a brother. Imagine if you were a leader at this time period in Italy, and suddenly a white cloaked figure comes over and stabs you with a blade that you don't even see coming. This is the feeling the author creates after every one of Ezio's assassinations.

I would recommend this book for 7th grade and up. This book is inspired by the Assassin's Creed II video game. If you have played the game then it's a must read. Not every 7th grader would like the book. You have to like action books and this time period. In my opinion it was a very good book and an enjoyable read.