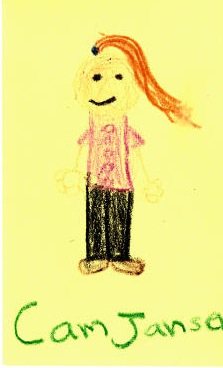 Cam, Eric, and Cam’s father were going to the airport to get her aunt Molly. Aunt Molly works for an airline and because she flies so much she sometimes feels like a duck and says, “Quack!” instead of ,”Hello.” When they got the arrivals building Cam’s dad forgot where he had parked but Cam was able to remember just where it was. They went inside the terminal and found Aunt Molly but when she got up to leave with them she noticed she didn’t have any shoes on! Eric asked her if she thought she had left the shoes on the airplane when she was resting. The man from the airline called the flight crew but they still couldn’t find the shoes on the plane. Cam remembered that Aunt Molly had first started resting in the sunlit side of the terminal so maybe she left her shoes there. Eric went and checked under the seats and found the shoes and they were able to go home!

I liked the book. I think that Cam Jansen is smart because she remembers everything and I like the moment when she figures it out. She found her aunt’s shoes and they were able to go home. Cam is special because she’s able to remember things that other people can’t. I also liked Eric because he helps Cam. He was even the first one to find the shoes.