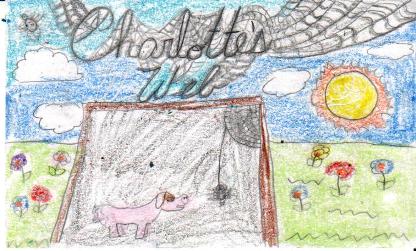 This amazing book is about two friends and that care about their friendship. It all starts when a little girl’s dad wants to kill a little runt but the little girl whose name is Fern, doesn’t want her dad to kill the little runt because there is no reason to kill him and that it is not his fault that he is smaller than the other piglets. So Fern said to her dad that she would be responsible for the runt. The next day Fern decided to name the little runt Wilbur. Every day after school Fern would go and take Wilbur for a walk or bath and then take him to bed. Days passed and Wilbur grew and grew the next couple of days. But then Fern’s dad wanted to sell Wilbur to Mr. Zuckerman. Fern had to deal with it she had let Wilbur go. When Wilbur arrived to his new home he wanted to play with the animals but the animals didn’t want to play with him and would ignore Wilbur. Then a beautiful gray spider showed up. Wilbur wanted to know where she or he was. But the creature said that she would talk to him tomorrow. So the next day past the two friends met and got to know each other a lot more. Then the animals got into the two friends discussion and they said to Wilbur that the family would kill Wilbur for Christmas and eat him. Wilbur got scared and Charlotte the spider said and promised Wilbur for not getting eaten on Christmas. So Charlotte helps Wilbur with adjectives that describe him. Soon Mr. Zuckerman enters Wilbur to a competition of the world’s greatest pig. The family wishes to win. Read to find out what happens next!

This book was interesting to me because it is about friendship that is important to two friends and that they care about each other. I also like this book because I love friendship books and this book is the most sweet, kindest, and most interesting book I’ve ever read. If I were a character in this book I would be Charlotte because she was so sweet to Wilbur. No one else would be kind to Wilbur in the beginning but you should see the animals at the end of the story. Plus, I think this book was not the same thing as the movie.

AM
is a student in
Mr. Fulton's Class