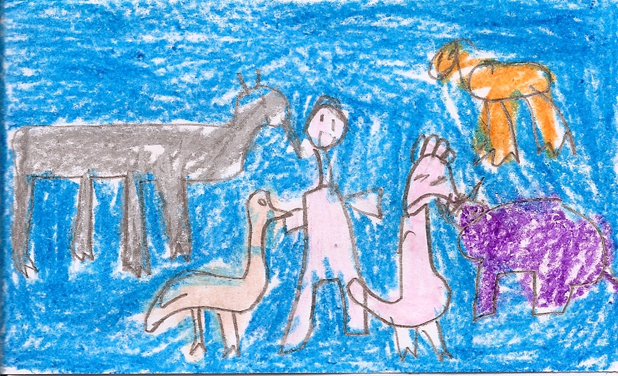 Danny is a boy and it is his mother’s birthday and he has not given his mother a birthday present. He saw the Hen and the Hen said, “I can give you a fresh egg.” But Danny said that his mother has a fresh egg. So Danny and the Hen skipped until they met the Goose. The Goose said, “I can give you nice feathers to make a pillow.” But Danny said that she has a pillow. So Danny and the hen and the goose all hopped until they met the Goat, and Danny said no to his idea as well. He met with the Hen, the goose, the Goat, the Sheep, the Cow and the Bear. They all tried to help him get his mother a birthday present.

I like the story because he met with a hen, a goose, a sheep, a cow, and a bear. I liked that they were trying to be helpful. My favorite part is when he saw Mr. Bear because he was the one that really helped Danny find a present and he was nice.

I think that my friend Ann Marie is going to like this book because it is a great story and because Ann Marie likes animals.

Aaliyah D.
is a student in
Page Turners After School Program / Rauschenbusch Center