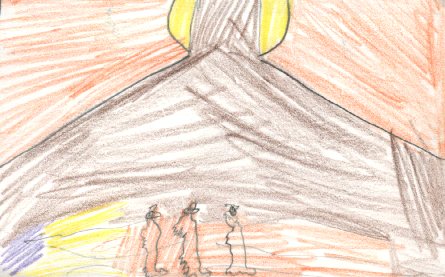 This story is about five clans: ShadowClan, ThunderClan, RiverClan, WindClan, and StarClan who were all running away from Twolegs. They left home though the mountains in search of a new home. In the mountains they ate very little and slept very little.

On their difficult task of finding their new home, they struggled with everything that they had or needed to get. Even though the clans were rivals, on the journey they kind of united into one clan. They soon were lead to the Tribe of Rushing Water and they were well fed and were able to rest. The clans realized that the Tribe was not their home ,so they went on. Finally they found their place by a lake.

I really enjoyed reading this story because it taught me about the wild and how tough it can be. The clans did not have much food, yet they were strong for the sake of their families.

My favorite character was Firestar, even though he was not a main character in the book. He was the leader of a clan who had to prove himself by living up to high expectations. I admire his devotion and courage.

I would recommend this story mainly to people who like cats, but after you read of couple of books in the series, you might change your mind about them. Another reason I liked this story is because it was filled with weird twists and turns. If you like mysteries, this book is for you.