How Much Is That Doggie in the Window?

How Much Is That Doggie in the Window? 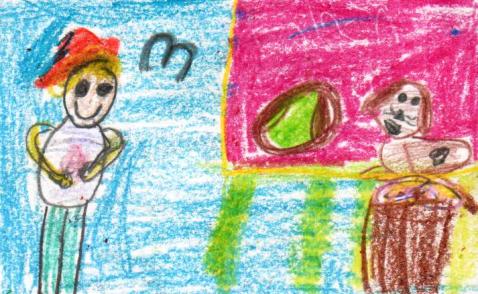 Have you ever wanted something but you didn't have enough money to buy it? In this story, there's a boy who wants a dog but he didn't have enough money. The man at the pet shop asked him if he wanted a hamster, snake or mouse, but the boy only wanted the dog, so he left. The boy decided to sell lemonade to raise money to buy the dog, but he didn't earn any money. The money that he did have before was spent doing nice things for his sister, mom, and dad, like buying them chocolates, tissues, and frozen yogurt. So, that night, the boy was counting his money, and all he had left was a dollar. The next day, the boy went to the pet shop, but the dog was not there. He asked the man at the store where the dog was, and he found out that it had been sold. Read this book to find out what happened to the dog.

We liked this book because it has a lot of detail, which helped us understand what the book is about. If it didn't have pictures, we would not understand what the story was about. We loved the illustrations because they look real. Our favorite part was when the boy found out what happened to the puppy, because it was really cute.