Anansi and the Seven Yam Hills

Anansi and the Seven Yam Hills 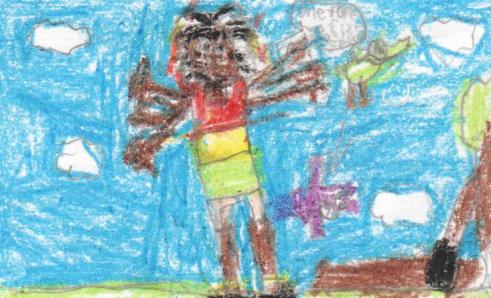 When Anansi plants seven yam hills, he decides to count them. "One, two, three, four, five, six, SEVEN!" When Anansi counts to seven, he goes up into the air and got an idea. He's going to trick his friends into doing the same thing. It works, except for Guinea Fowl, who decides to trick Anansi and make him go into the air. It was so funny when Anansi tricked the Hippo into saying "seven" and he went upside down in the sky. A lesson you can learn from this book is that you should not trick your friends, or else they will not play with you anymore. You should read the book to find out how Guinea Fowl tricked Anansi.

I like this book because I saw Anansi go up into the air. I also liked that Anansi tricked his friends, but then Guinea Fowl tricked him. My favorite part is that Hippo went upside down in the air, because he almost squished a bird. I liked the illustrations in this book because they make Anansi's flying friends look funny.

CV
is a student in
Mr. Fulton's 2nd Grade Class