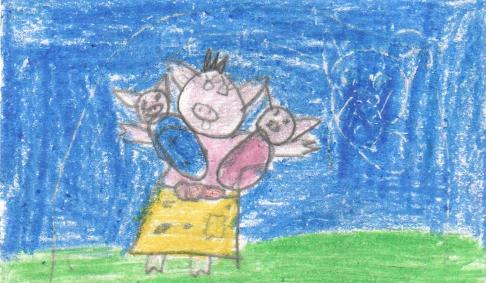 Hey, have you ever heard a pig talking? I have never heard a talking pig! But this story is about a pig who is a princess. Her name is Pigtoria. She lives in a castle that got destroyed. So, she saw on the news that a prince said he needed a princess. She applied. She went to the prince and saw him eating his lunch. He told her to go to her room. She ordered pizza for everyone even the pizza delivery boy. That night the prince put a pea under Pigtoria's matress to find out if she could feel the pea. That's because only princesses can feel such a small pea. Pigtoria couldn't sleep at all that night and when the prince told her about the pea, she got angry. Read this book to find out what happens to Pigtoria and her prince.

I like this book because it is hilarious and made me laugh. Pigtoria sure ordered a lot of food. Too bad the food was not very healthy. My favorite part was when she got so mad at the prince who had not told her what he did. She is like me because I get mad when people don't tell me what's happening. I thought the illustrations were good-- actually marvelous. They looked real and were very colorful.

I recommend this fairy tale because it is so funny. I think kids who like pigs will like to read this story because she is a princess.

AA
is a student in
Mr. Fulton's 2nd Grade Class