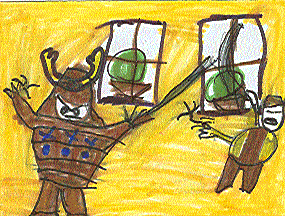 This book is about the Bailey School kids. Their names are Eddie, Howie, Liza, and Melody. The friends are at the playground. Melody smells pumpkin pie that smells so good that she didn’t talk, move or walk – she could just smell. They met a person selling pumpkin pie; he had a samurai sword so they thought he was a ninja who was there to steal priceless art. But they were mistaken – it was just his exhibit from the museum.

I liked the book because it shows not to judge people for what they look like. So if someone is pretty they could be mean. Eddie reminded me of my friend Ethan. In the book Eddie decided that someone was a ninja just because he had a sword, but that wasn’t true. One time at my friend Ethan’s house, he said someone was ugly, but I said that he could be nice. You just can’t jump to conclusions. The book made me feel happy. I’ve read Bailey School Kids books before. I like that series because it has good characters in it, and interesting things happen to the characters.