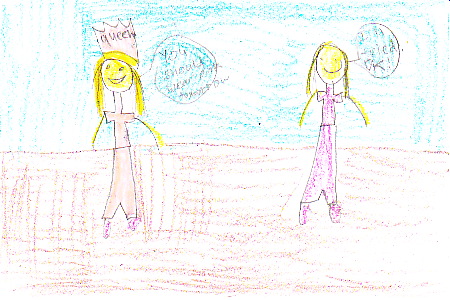 Have you ever read any Alyssa Crowne books? If you haven't, you should choose this one! Juliet Henry is turning seven! Juliet is going to have a pink princess party. She has also decided to only invite girls so the boys in Juliet's class are not coming! One of Juliet's classmates and all of his friends are mad at Juliet for not inviting them. The reason Juliet decided not to invite them is because the boys had been rude and mean to her. Before the party she decides to wear pink everyday (she even had a pink crown). At the end, Juliet decided to invite everybody.

My favorite character is Juliet because she is nice. She also did not like the boys at the beginning of the book. My favorite part of the story is when Juliet invited all of her classmates to her party (she decides to invite the boys again). The character that I did not like was Billy because he was rude. He teased Juliet in the story.

I would recommend this book to third graders because they all have birthdays. They might be like Juliet and not invite everyone. People also might know what it's like to not be invited to a party.