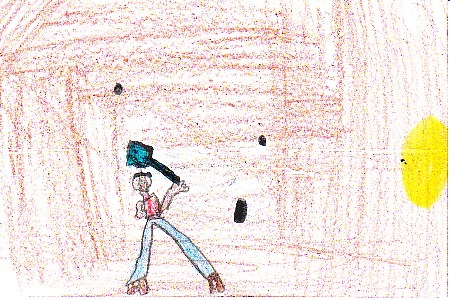 This book is about a man named John Henry. John Henry really believed in himself. He knew he could do anything! John new that he was one of the tallest and strongest around, so he went out to work in the cotton fields. Then he worked on a riverboat but left to start working on the railroad. Even though he was strong, there was a new steam that everyone thought would beat John Henry. So, one day a man called John to a race with the steam drill. John Henry won the race! Sadly, his victory was his last step. He died as soon as he won.

My favorite part of the book is when John Henry saved a lot of people from dying (a cave was about to cave in). This is my favorite part because I want to be a super hero just like him! I liked this book because it makes you believe you can do anything you want if you set your mind to it. John Henry does this when he competes against the steam drill. He knew he was going to win and he did! My favorite illustration in the book is the one where the moon shines over John Henry's cabin because it reminds me of when I was in a cabin in California looking up in to the mountains.

I recommend this book to anyone who wants to be a hero. You could do something little, like being nice, and be considered a hero. John Henry was a great hero to everyone!