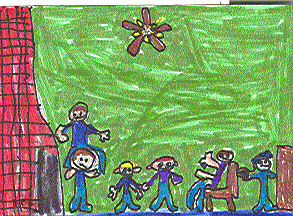 This story is about Frank and Joe trying to solve a mystery for a man named Mr. Jefferson. While Frank and Joe were on Cabin Island with their friends Chet and Biff, a man named Hanleigh threatened them to get off the Island. Frank said they had permission to be on the Island; however, they left. Later, they went back to Cabin Island to look for Mr. Jefferson’s lost medals and his grandson Johnny. They found Johnny, but he ran away. In the end they caught Johnny, Hanleigh got arrested, and Mr. Jefferson got his medals back. I liked this book because it is a mystery book, and I like mystery books. I like Frank and Joe because they’re the people who try to solve the mystery. My favorite part was when the cops broke in and arrested Hanleigh. The illustrations are great even though they are black and white. They looked good and they went with the story. I want to read more books in this Hardy Boys series. I’ve already talked with my grandmother about it, and she said I could have the Hardy Boys books that she and my aunt both have. I would recommend this book because it’s a good mystery. I think my friend Bryan would like to read this book because we’re good friends and we like a lot of the same things. Since I liked this book I think he might like it, too. Bryan’s favorite part of the book would probably be when Mr. Jefferson fell down and hurt his head after he saw the guys with the masks on. He’d probably like my favorite part, too – when the cops broke in and arrested Hanleigh.