Wishbone - Be a Wolf!

Wishbone - Be a Wolf!


Reviewed by Brandon B (age 9) 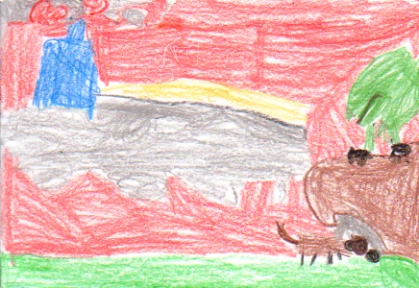 This book is about a king named Beowulf who has to gatherhis courage and an army called, The Geats, to fight three monsters. This is how happens. Beowulf and his army go to Beowulf's brother Hrothgar’s kingdom to save them from two giant monsters who wake up from a 500 year nap and they're very hungry. Then 50 years later Beowulf has to fight a dragon twice the size of a castle and more muscles than a giant himself. How he does this is very exciting.

My favorite part was when Beowulf fought the last monster because he was old and could barely move but he was still swift. He could fight that monster. This book shows you that sometimes you have to gather courage to do what has to be done.

Beowulf is an old English tale. It is one of the oldest stories in the English language. It was made up around 75 A.D. and is retold in this story.

This is part of the WishBone series . They always tell about Joe Talbot and his dog, Wishbone. They retell famous stories and Wishbone is usually the hero of the story. They turn the stories into modern day language. I like that they also have a lesson learned in them. You will have to read this book to find out the lesson learned this time.

I recommend this book to anyone who likes reading. This story takes place in the past. People who like adventure stories will like this book.

Brandon B
is a student in
Sister Janet's 4th Grade Class