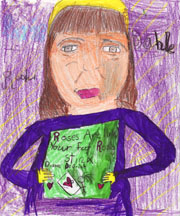 This story is about a boy named Gilbert, who wrote two nasty Valentine's Day cards.

Gilbert was good at writing short poems and when his teacher Mrs. Byrd asked her class to make Valentine's Day cards, Gilbert made up nasty poems for Lewis and Margret.

Lewis had once tweaked his nose and Margret had made fun of his glasses and so he did not quite like them.He also played a trick on them by not signing his name on the cards. Margret and Lewis felt hurt when they came to know about Gilbert's cards which said bad things about them.

No one sat next to Gilbert at lunch because they were upset with Gilbert.You have to read the rest of the book to know what will happen next.

I think that it ia a great book to read because it talks about school life and everyone should have a chance to read this book. This book teaches you a lesson about being nice to people. My favorite part of the book was when Gilbert learns it is not OK to be mean to his classmates. I also like this book because of the poems which are full of rhyming words. I have also learned from this story, the true meaning of making Valentine's Day cards.

I think all children of my age or older should get a chance to read this book. It teaches us that we should not be mean to others. It is a fun book telling us about school life.