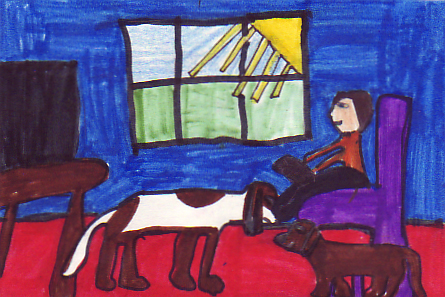 Have your ever felt like someone invaded your home or stole someone away from you? Well that exactly how T.P the main character and dog feels in Goosed by Bill Wallace. T.P was living the good life. He was well cared for and got all the attention from Jeff his owner. All was well until one day Jeff's friend dropped a puppy off at their doorstep with a note saying she left for vacation. Jeff's parents were mad at first but they had no choice but to let the puppy stay. When Saturday came T.P thought the puppy was supposed to leave. But when Mandy came over the puppy didn't leave. Jeff, T.P, and the puppy, Mocha start doing everything together and T.P start to feel less important. Then one day when the three of them go for a walk, Jeff throws the puppy's favorite ball into the water. The puppy who is a great swimmer runs into the water and suddenly faces a big problem. T.P has to make a choice: save the puppy or get Jeff's attention back. Which will he choose? You will just have to read Goosed by Bill Wallace to see what choice T.P makes.

If you like books that are breathtaking then you will like this book. I do like books that are breathtaking so I loved this book. An example is when the puppy is inside bugging T.P; T.P decides to go outside to get away. T.P saw a rabbit. He started to chase the rabbit but something bigger caught his eye. He knew he couldn't take what he saw down by himself. Before he knew it he was cornered by three coyotes. I wasn't sure if T.P would get away. I was on the edge of my seat. That is a reason why this book is breathtaking. Jeff is the owner of T.P and the puppy. A character trait Jeff has is protective. When the puppy jumps in a pool Jeff jumps in to save the puppy even though the puppy could swim. I also like this book because I have a connection from the book to my own life. Both T.P and the puppy jump into the swimming pool. My dog also jumped into water once. Unlike Jeff I didn't jump in, but even though I knew she could swim I still worried. I could relate to Jeff's feeling and understood why he jumped into the pool. I wanted to jump in but saw my dog already swimming back. A character I didn't like in this book was Cord the cat. He was always mean to the puppy for no reason. I think Cord should give the puppy a chance. If Cord got to know the puppy he may have found he liked him. I think everyone should be treated fairly and not be judged to quickly.

I recommend Goosed to people who like books that are adventurous and breathtaking. This book would suit people who like adventures because it is full of action packed events, one right after another. I would also recommend this book to fourth and fifth graders because it has many realistic parts to which they can make connections.

Brittany B.
is a student in
Mrs. Grunow's 5th Grade Class