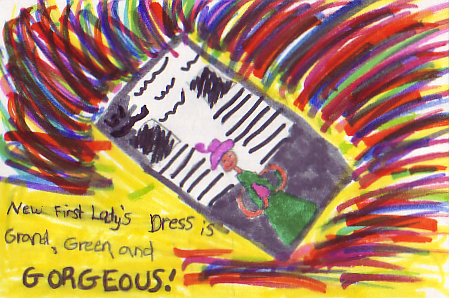 A Spy in the White House is about a girl named K.C. whose mom is getting married to the President of the United States. But while K.C. and her mom are talking about the wedding someone spies on them and hears the plans. A reporter named Darla Darling finds out and writes a column that appears in The Star newspaper. K.C. and her best friend Marshall decide to find out just who is the Spy in the White House.

I really enjoyed this book. When I had to stop I didn't want to put it down. I thought it was a good book because most of the characters were mysterious. For example, one of them was always talking quietly on a cell phone and some characters were wearing weird clothes. This book is in a series called the Capital Mysteries. All the stories happen in Washington, D.C. In each book K.C. and Marshall try to solve a mystery.

I recommend this book to strong second graders through 4th graders who like mysteries. The good thing is that it is part of a series. So, if you like A Spy in the White House, there are other K.C. and Marshall adventures to read.