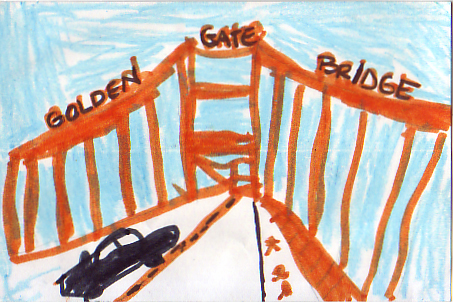 Nate the Great San Francisco Detective is about a boy named Nate who goes to visit his cousin, Olivia Sharp in San Francisco. While he's there Nate gets called on a case. A boy named Duncan lost his joke book and Nate helps him find it. Nate asks Duncan where he had it last and they begin to search the city. In the end, Nate finds out that sometimes the wrong place is the right place.

I like this book because the author is showing that sometimes the wrong place is the right place to look for something that is lost. My favorite part is when they are on the Golden Gate Bridge. I like to picure the bridge in my head becasue it looks really cool. I liked the illustrations becasue they helped me to figure out the mystery while I read. Sometimes the pictures give you some clues to help solve the mystery.

I would recommend this book to kids in second through fourth grade. It is easy to understand and it's fund to read because it has red herrings that could lead you off track. People who like Nate the Great should read this book.