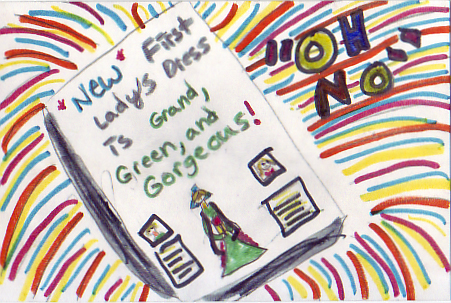 Has your mom ever dreamed of marrying the President? Well, K.C.'s mom doesn't have to. K.C solves mysteries and her mom is getting maried to the President of the United States but she doesn't want anyone to know where she is going on her honeymoon or what her wedding dress looks like. Then all the details of the wedding end up in the newspaper. Will K.C. and her best friend Marshall find the spy? Read the book to find out.

I loved A Spy in the White House because the ending was so surprising. I was so certain that I knew who the spy was but I was wrong. It was the "person" I least expected. My favorite part was when K.C. asked Marshall if he wanted to dance and he just ran away. It was so funny. I also noticed that the Vice President was always acting secretive, but did she do it? "Hmmmmm." At the end of the book Darla Darling, the reporter who leaked the plans, changes. She says she will never write personal information in the newspaper again.

I would recommend this book to people who like A to Z Mysteries, because they are by the same author, and to people like me, who love to solve mysteries. These books would be good for kids age 8 to 10. Good luck solving the mystery!